The Moscow State Academy of Choreography commonly known as The Bolshoi Ballet Academy is one of the oldest schools of ballet in Russia. Its history dates back to 1773, when Catherine the Great issued a Decree prescribing the introduction of first ever “dancing classes” to the curriculum of the Moscow Foundling Home sponsored by the Empress herself.  The Empress believed that the “perfection of upbringing and nurturing” is the surest way to make better people. A great credit for the realization of Catherine’s idea goes to Privy Councilor Ivan Ivanovich Betskoi, who was the President of the Imperial Academy of Arts and the Chief Curator of the Moscow Foundling Home.

To train the orphans in the art of dancing, best teachers and instructors were invited to come to Moscow from Europe, where stage dance had long since become a well-respected art. Filippo Beccari, an Italian ballet dancer and ballet master, became the first dance teacher at the Foundling Home. The day when he was engaged to teach at the Home – December 23, 1773 – is the date of foundation of the Moscow Ballet School. 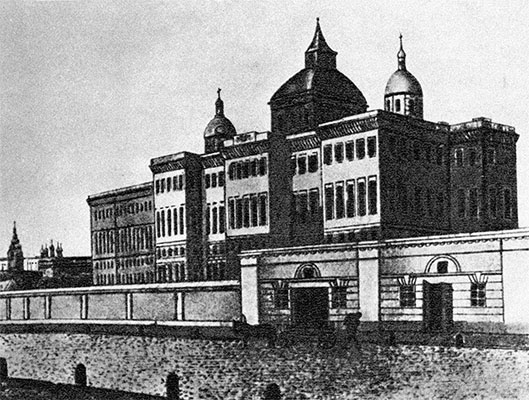 On 23rd day (of December 1773) with the consent of the Chief Curator of the Foundling Home His High Excellency Privy Councilor and Cavalier Ivan Ivanovich Betskoi, an Italian, Filippo Beccari, who taught in Vienna before, was engaged to teach at the Moscow Foundling Home.
He has been teaching “theater dancing” to his pupils.
Those of them “who prove crafty to dance a figure with all precision, will show themselves in all pantomime ballets and dance solo”.

Beccari was put in charge of dance education of 26 girls and 28 boys. In three years he was supposed to train and nurture soloists and corps-de-ballet for the Imperial Theater, i.e. dancers capable of striking certain poses and forming stage groups. He taught stage and salon dance. The perseverant and industrious pupils attended his classes four times a week: from 7 to 11 a.m. on Tuesdays, Wednesdays, Fridays and Saturdays.

In 1779, the Foundling Home graduated its first class trained in the art of dancing. The glorious names of the students went down in the history of the Russian theater arts. Since 1784, Beccari’s pupils were constantly engaged to dance at the Bolshoi Theater, called “The Petrovski” back then. 1784 was also the year the Ballet School with all its faculty and students was put under direct supervision of the Petrovski Theater.

In 1806, the School was put under the supervision of The Imperial Theaters Office, and the name was changed for The Moscow Imperial Theater School. According the “Theater School Regulations” introduced in 1811, the main objective of the School was “the perfection of Russian theater shows, ballets, reinforcement of existing and, if possible, establishment of new orchestras, as well as replacement of foreign artists with the Theater School graduates”. Provisions of the Regulations concern the training and education of future performers in special and general subjects. At first French and Italian masters taught the ballet classes, but since the beginning of the 19th century Russians began teaching at the School alongside, including A. Glushkovski, an outstanding dancer, ballet master and teacher, the favorite student and devoted follower of the celebrated Charles Didelot.

The appointment of A. Glushkovski as ballet master, principal teacher and head of the Theater School was an event of huge importance for further development and evolution of the Moscow ballet. Students nurtured by A. Glushkovski and a famous French ballerina and dance teacher F. Hullin Sor – T. Ivanova (Glushkovskaya), D. Lopoukhina, A. Voronina-Ivanova, E. Sankovskaya, I. Lobanov – became the jewels of the Russian ballet in 1820s – 1840s: at the  Petrovski and, since 1825, at the Grand Petrovski built to replace the old theater that burnt to ashes.

According to A. Bakhroushin, the famous ballet historian, “those were the years that the Russian and, consequently, the Moscow ballet gained its creative identity – the years when the Moscow ballet secured the distinctive original repertoire and no longer had to depend on foreign ballet theaters, secured the Russian performers and, most importantly, the national school of dance”. Since the day of its inception, the Theater School had been educating and nurturing drama and opera artists and orchestra musicians alongside ballet performers.  The fusion led to mutual enrichment of the three arts, which was of great value to all Scholl students.

The end of 19th century was the time of substantial changes in the life of the Moscow Theater School.

1895 was marked by the approval of the first ever “Curriculum for Professional Ballet Dancing Classes” put together by V. Stepanov,   performer of the Mariinski Theater. Such program had been the dream of A. Glushkovski.

In the end of 1890s V. Tikhomirov, A. Gorsky, V. Ryabtsev, V. Mosolova, M. Mordkin, and A. Valinin, joined the faculty, to teach at the School for many years. Terms of employment of I. Khlyustin, M. Stanislavskaya, V. Geltzer and N. Domashew were renewed.  The teacher who greatly contributed to the education and nurturing of young ballet performers, teachers and ballet masters was V. Tikhomirov.

Upon graduation from I. Ermolov’s class at the Moscow Theater School in 1981, V. Tikhomirov spent some time in Saint Petersburg, learning from C. Johansson, M. Petipa, E. Cecchetti and P. Gerdt.  Capitalizing on the experiences he made under the tuition of the prominent masters, he laid the foundation for his own method of teaching that elaborated and further perfected the traditions of the two ballet schools: in Moscow and Saint Petersburg. V. Tikhomirov taught at the Scholl for 35 years, nurturing several generations of performers for the Moscow ballet.

Alexander A. Gorsky was a world-famous ballet master, who learned the art from the Great Marius Petipa, a ballet teacher, whose name is related to many triumphs and successes of the Moscow school of ballet. A man of many creative accomplishments and a hard worker, he greatly contributed to the development of the art of Russian ballet and further evolution of the Moscow school.

In 1922, V. Tikhomirov put together lists of “Requirements” the students of the State Ballet School had to clear to pass from one grade to another, as well as “Requirements” to graduates who applied for positions at the Bolshoi ballet company. He is also the author of syllabuses for classical dance and musical education. The variety of subject at the School was also broadened, to include History of Drama Theater, History of Ballet, History of Fine Arts and History of Stage Costume.

During the War years, the School managed to retain the potential accumulated in the past and kept evolving. In 1944, the first Graduation Gala after the return to Moscow from the evacuation took place.  Young Maya Plisetskaya was among the participants of that Gala. Putting the Show Bill together, N. Tarasov, the Director and Creative manager of the School, wrote: “The entire show must be a demonstration of methods of the School’s faculty nurturing the students in accordance with the best traditions of the Russian classical ballet while striving to create new artistic assets on that basis”.

In 1960, Sofia Golovkina, the celebrated ballerina who had just finished her professional stage career became the Principal of the Moscow School of Ballet. After 27 years she returned to her alma mater enriched with extensive stage experience. Deep understanding of new stage requirements, broad-mindedness and ability to see far and wide, never-dying creative spirit of a pioneer and experimentalist combined with fanatical devotion to the art and craft of teaching helped S. Golovkina open a new page in the history of the School.